Millions of Indians turned off their lights and lit up balconies and doorsteps with lamps, candles and flashlights on Sunday, in response to Prime Minister Narendra Modi’s appeal to “challenge the darkness” spread by the coronavirus crisis.

5 April 2020 at 9 pm whole India came to the doors and balcony of their house and lit candle, Diya, mobile light or torch. PM Modi earlier requested the nation of 1.3B people to stand united against this coronavirus crisis. Whole India listened and as a result, it seemed like Diwali came early in India.

Well. PM or their experts are not being overly ambitious to say such a massive and diverse country will be united forever with this one act.  But does that mean we should stop doing anything? The best way to understand it is this – At a time of crisis, it is important people listen to the PM or the leader of the country and the experts. Following rules such as “social distancing” is the most important thing. To support this purpose, if PM creates a campaign (regardless it increases his popularity further for votes or not) is it worth doing such campaign to at least try bringing people together for the above reason? Is it true such campaign can increase the awareness of the fight against the crisis?

Also, people sitting at home during lockdown it is easy to have a loneliness feeling. This campaign makes people believe at least for a few minutes that we are all in this together.

For a large nation to unite and follow the rules and act together supporting each other is a little difficult. The prime purpose behind this campaign is to unite India together at least in this crisis time so we all act in the collective consciousness and support each other. It is time to think not just for yourself but also for the community. Whether unity or not, in either case, the campaign can at least spread the awareness that we are in it together and that promotes the fact that we need to act together. There are bad elements in every country but efforts can’t be stopped considering those bad elements will not follow. Those who follow will listen to it and some who don’t listen at all won’t listen. But trying and taking actions is important.

In a war situation, if PM requests nation to stand together via some speech or some campaign like this – will you support PM or say that this is just for voting?

We don’t know if it was to get votes, to kill the virus or spread BJP popularity. All we know is it is worth taking actions to promote fight against coronavirus.

“On 5th April on Sunday at 9:00 p.m., I want 9 minutes of your time. Switch off all the lights in your houses and stand in your doorways or balconies and light candles, lamps, torches or flashlights of your mobile phones to highlight the objective for which we are fighting together,” he had said in the message. 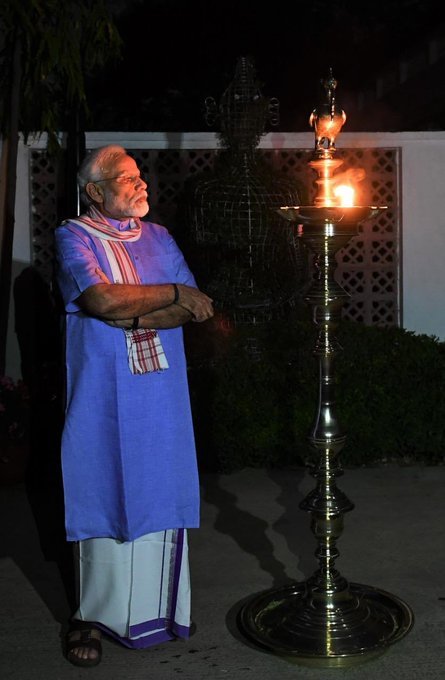 PM Modi has shown a great leadership time to time when the country needs it the most. Various campaigns launched by PM Modi has turned out to be very effective in creating the desired outcome which in this case is to bring people together. A collective consciousness made of individual consciousness of millions of people all standing together with each other and showing support to their PM in time of crisis. This positive energy created will help each individual get the courage to battle this crisis situation.

The show of unity came as the total number of coronavirus cases in India increased to 3,577, while the death toll rose to 83.

As soon as it was 9:00 p.m., residential complexes across the nation blacked out, as millions of people turned off their lights and came out onto their balconies and roofs. Some people were seen lighting candles and lamps, while others waved their phones with the flashlights turned on.

Chants, patriotic and religious, were heard from several apartment buildings in the capital, New Delhi, amid roaring applause.

#9pm9minutes trended on social media as several people, including Modi, shared their pictures.