Why Diwali Is Celebrated? 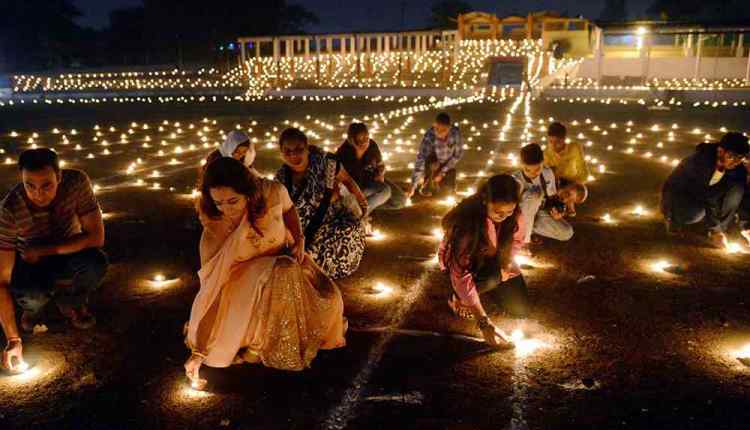 Diwali is the most important festival but why Diwali is celebrated? Why is it so important to Hindus around the world and what’s the story behind this great festival of lights?

Diwali is celebrated by Indians around the world because this is the day when Lord Rama returned to India after defeating demon king Ravana. The day of Diwali is marked as victory of good over evil.

This day has huge importance to Hindus around the world. On this day, Hindu God King Rama and his wife Sita returned to their kingdom in northern India ending their exile following the defeat of demon king Ravanna. When Lord Rama returned back to hid kingdom, thousands of people welcomed him by lighting “Diyas” (lamps) to light up their houses and streets. This is the reasons, even today this festival is celebrated by lighting up Diyas and with fireworks (burning up crackers).

However, you will see less of burning of crackers in modern India due to pollution regulations by the Indian government.

Diwali or Deepawali, the word itself means “series of lights” and during the festival houses and shops are decorated with candles and lights.

This is meant to represent light over darkness and the Hindu belief that good will always triumph over evil.

For many Indians, Diwali honours Lakshmi, the goddess of wealth and people will start the new business year at Diwali and some will say prayers to the goddess for a prosperous year ahead.

Sadhguru explains in his own wise words the meaning of Diwali for Indians, the importance of the day and why it’s celebrated. Video Language: English

The mention of Diwali is mentioned in the Ramayana (one of the two major Sanskrit epics of ancient India, the other being the Mahābhārata. they both are the biggest part of great Indian history).

The epic, narrated by Maharshi Valmiki is based on the life of Rama, the legendary prince of the Kosala Kingdom in northern India. It follows his fourteen-year exile to the forest by his father King Dasharatha, on request of his step-mother Kaikeyi.

The crux of Ramayana is Lord Rama’s travels across forests in India with his wife Sita and brother Lakshmana, the kidnapping of his wife by Ravana, the great king of Lanka, resulting in a war with him, and Rama’s eventual return to Ayodhya to be crowned king. This return is celebrated as Diwali.

The Ramayana is one of the largest ancient epics in world literature. It consists of nearly 24,000 verses. In Hindu tradition, it is considered to be the adi-kavya (first poem). It depicts the duties of relationships, portraying ideal characters like the ideal father, the ideal servant, the ideal brother, the ideal husband and the ideal king.

Ramayana was an important influence on later Sanskrit poetry and Hindu life and culture. Like Mahabharata, Ramayana presents the teachings of ancient Hindu sages in narrative allegory, interspersing philosophical and ethical elements.

The story not just influenced India but also the neighbouring countries. These countries also celebrate this great history in their own ways. The characters Rama, Sita, Lakshmana, Bharata, Hanuman, and Ravana are all fundamental to the cultural consciousness of the South Asian nations of India, Nepal, Sri Lanka, and the South-East Asian countries of Thailand, Cambodia, Malaysia, and Indonesia.

There are many versions of Ramayana in Indian languages, besides Buddhist, Sikh, and Jain adaptations. There are also Cambodian, Indonesian, Filipino, Thai, Lao, Burmese, and Malaysian versions of the tale.

In the end, hope this answers the question: why Diwali is celebrated.

Here is another video that explains the story of Ramayana –

Welcome to Australia’s largest community website for Indians in Australia.